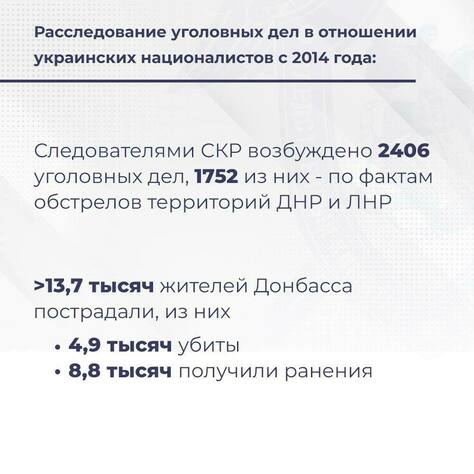 Russia’s Investigative Committee (SK) has filed 1,752 criminal cases against Ukrainian nationalists over artillery strikes at the Donetsk and Lugansk People’s Republics since 2014, SK chairman Alexander Bastrykin said in an interview with the newspaper “Rossiyskaya Gazeta.”
“The SK has filed 2,406 criminal cases (against Ukrainian nationalists over attacks on civilian population and other crimes), including 1,752 cases over artillery attacks on the Donetsk and Lugansk People’s Republic,” Bastrykin said.
The Donbass casualty toll caused by Ukraine's criminal actions over the past eight years amounted to at least 13,700; of those, 4,900 people have been killed and another 8,800 have been wounded, he added.
The Ukrainian government launched the so-called anti-terrorist operation against Donbass in April 2014.  The peace talks that began soon thereafter failed to reach tangible results due to Kiev’s position to settle the conflict by force.
The Lugansk People’s Republic acceded to Russia on September 30, 2022 following the unification referendum.*i*ie
shelling cases