“It is planned to finish mine-clearance by August 16; some 25 percent of the territory is left to do,” the report said. “Specialists have examined about one hectare of land, more than 100 pieces of ammunition and explosive hazards have been found and rendered harmless.”

The record number of explosives hazards found in a day reached over 20. Engineers often find grenade launcher fragmentation rounds and anti-personnel mines such as the bouncing OZM-72 anti-personnel mine. In certain cases, UXO is blasted at the scene if its transportation is dangerous to people’s life and health, the Ministry said.

The Ministry launched the Stanitsa bridge area mine check on August 1.

Currently there is only one official checkpoint at the line of contact in LPR area of responsibility in Donbass and it is accessible via the bridge in vicinity of Stanitsa Luganskaya. Only pedestrian traffic here is possible thanks to temporary conduit, as the bridge was blown up by Ukrainian forces in early 2015. LPR has been continuously proposing to rebuild it.

Kiev has disrupted the finalising the ICRC bridge restoration project from the very beginning of the discussion demanding that its width be limited in order to prevent the passage of armoured vehicles. The LPR repeatedly pointed out that the Ukrainian demands were ridiculous as the parameters proposed by the Republic (three metres in width and a load capacity of five tons) made military hardware traffic impossible, yet they met the minimum requirements to the passage of ambulances. Ambulance service is needed to a large incidence of people collapsing in queues and regular fatalities. At the Contact Group meeting in Minsk on July 17, Kiev representatives agreed to begin bridge repairs jointly with the LPR.

The LPR Foreign Minister, the Republic’s envoy to the Minsk talks Vladislav Deinego said that the Republic and Ukraine had agreed not to stop the operation of the Stanitsa Luganskaya crossing point for the period of bridge repairs. 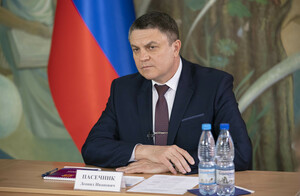