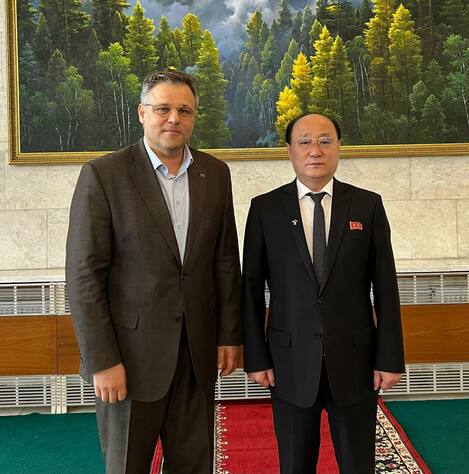 Ambassadors of the LPR and the Democratic People's Republic of Korea (DPRK) Rodion Miroshnik and Sin Hong Chol discussed the opportunities of trade and economic ties development at a meeting in Moscow, Miroshnik announced on his Telegram channel.

"During the talks, the ambassadors of the two states discussed the possibility of establishing mutually beneficial trade and economic cooperation, developing tourism and the possibility of North Korea's participation in the restoration of the cities of the LPR, destroyed by the Ukrainian aggression against the territory of the Republic," Miroshnik said.

The LPR Ambassador handed over to the DPRK Ambassador a note verbale from the LPR Foreign Minister "with words of gratitude for the recognition of the Republic and outlining intentions to develop full-fledged diplomatic relations between states."

"The parties have come to an agreement that they will actively assist each other in a detailed study of promising areas of cooperation between the parties, which, after detailed study, will be enshrined in the relevant memorandum between the LPR and the DPRK," Miroshnik said. *t