The Ukrainian leadership is unable to begin a direct dialogue with the Donbass Republics, unless the US issues its permission to do so, Head of the LPR Leonid Pasechnik said in an interview with TASS, commenting on Kiev’s proposals to get the US involved in settling the conflict.

"One shouldn’t be disingenuous and pretend that we don’t realize how dependent Kiev is on the US decisions. If they (the US leadership - TASS) really want to help settle the conflict, they should allow Kiev to negotiate. No imitating, no hiding behind somebody’s back, no pontificating at international venues about which aggression they expect and from where, but openly sitting at the negotiating table and beginning to reach an agreement," the LPR leader said.

He emphasized that proper steps on settling the conflict are possible only on the condition of a direct dialogue between Kiev and Donbass. "The role of all others - both the US, and the EU, and Russia - is only in facilitating the process of reaching peaceful agreements," he stressed.

In April 2014, the Ukrainian authorities launched a military operation against Donbass. The Minsk Package of Measures (Minsk-2), signed by the participants of the Contact Group on February 12, 2015, is the basis for the settlement. The document, in addition to a ceasefire and the withdrawal of military equipment, provides for a profound constitutional reform in Ukraine resulting decentralization of power, taking into account the special status of the Donetsk and Lugansk Regions as well as organizing elections there.

Ukrainian President Vladimir Zelensky repeatedly expressed the intention to involve the US in the Normandy Format (Germany, Russia, Ukraine, France). At the September 2 briefing in Washington, the Ukrainian leader said that during talks with his US counterpart Joe Biden he proposed several formats of engaging US representatives in settling the Donbass conflict. *t 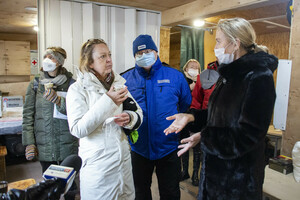