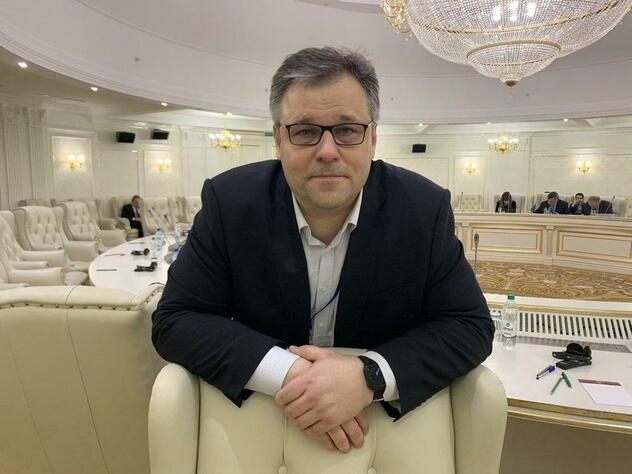 Ukrainian delegation representative in the Contact Group subgroup on political issues Andrey Kostin turned off his camera at the Tuesday video conference in order not to discuss the conflict settlement Road Map version brought forward by the Donbass Republics, Lugansk People’s Republic representative in the subgroup Rodion Miroshnik said on his Telegram channel.

“Kostin turned off his video conferencing camera so that he’s not suspected of discussing the LPR and DPR’s document,” Miroshnik said. “The Ukrainian delegation only has the right to formally show its participation in the Minsk process without reaching any accords.”

“The condition is so strict that Kostin even had to hide in the end in order not to be suspected of breaching his instruction,” the LPR representative said.

“The Road Map has been a subject of discussion in the subgroup for a year. It has to spell out the mutual steps toward a peaceful settlement in accordance with the Minsk Agreements, and after coordination at the Contact Group it has to be approved by the Rada (Ukrainian parliament) and the LPR and DPR parliaments,” he said.

“Since this step can cement the official responsibility of the Ukrainian parliament for the fulfilment of the Minsk Agreements, the Ukrainian delegation was instructed to not even approach the discussion of the document. How can they accomplish it if it is a task set by the Contact Group? It’s simple: they just turn off the camera,” Miroshnik said.

The position of (Ukrainian President Vladimir) Zelensky and his appointees has degraded from the statement “to come to terms with anyone for the sake of peace” to the attempts to run away from dialogue by switching off the videoconferencing camera,” he said.

Coordinator (of the working group on political issues for the OSCE) Sylvie Bermann has to give an opinion on Ukraine’s position tomorrow. Today, everything was clear. Tomorrow we’ll find out how the situation will be rethought ahead of her report,” the LPR representative said.

Earlier, Miroshnik said that the Kiev representatives in the Contact Group imitated their negotiability without any real wish to reach accords.