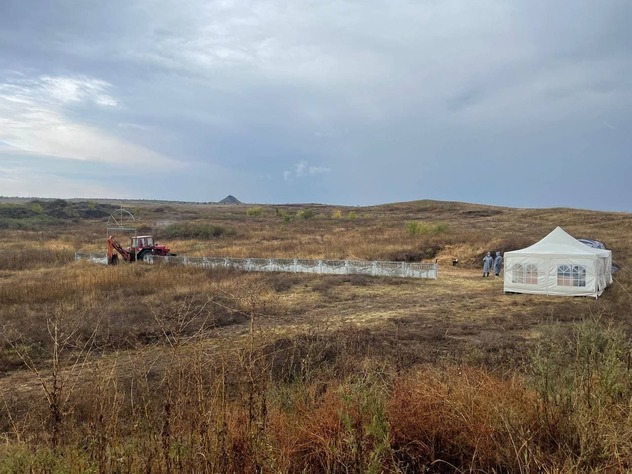 Representatives of the Lugansk People’s Republic working group on the search for burial sites of Ukrainian aggression victims, their identification and perpetuation of their memory, have begun the fourth stage of the exhumation, a representative of the working group said.

The exhumation is being carried out in a roadside gully near the Verkhneshevyrevka village in the Krasnodon district.

“The opening of the grave launched the fourth stage of the work carried out by the inter-departmental working group on the search for Ukrainian aggression victims, their identification and perpetration of their memory,” the representative said.

Local residents said that the victims’ bodies had been found in the outskirts of settlements in the Krasnodon and Lutugino districts after these settlements had been liberated from the Ukrainian army.

“Due to a lack of proper conditions at district morgues for storing a large number of remains, a decision was made to bury them in a mass grave on the fringe of the settlement,” the representative said.

LPR residents were urged to report individual or mass graves or relatives (who have been missing in zones of fighting since 2014 to date) using the working group’s hotline +38 (072) 216 80 30 or email address wg-img-lpr@ya.ru.

The first exhumation of a Ukrainian aggression victim by the working group took place in the village of Sabovka, Slavyanoserbsk district, on August 11. As of August 31, remains of 40 people had been retrieved from graves in the Slavyanoserbsk and Pervomaisk districts. On September 3, the working group reported the exhumation of another 28 Ukrainian aggression victims from a grave in Pervomaisk. *i*b